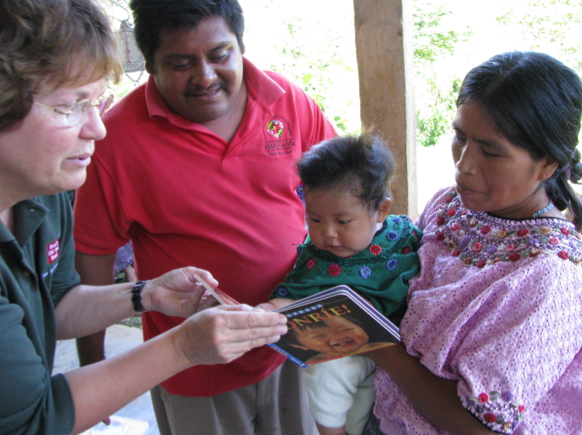 During the past hour, you have most likely read an article, email, book, sign or form. We read without giving it a second thought. There are millions of people around the world who cannot read or write. This became more than an abstract idea to me when we housed and cared for a small Guatemalan child and her parents some years ago. They were in the USA so that the child, 2½-year-old Maria Ingrid, could receive a delicate neurosurgery.

Ingrid’s mother, Magdalena, had never been to school and did not know how to read, write, or do simple arithmetic. She was a loving young woman who was quite competent as a mother. However, spending three months with her, experiencing the day-to-day challenges that arose, made me realize just how debilitating it is to be illiterate.

Magdalena had a passport that was signed with her thumbprint. At the hospital, Magdalena was required to sign countless forms. Everything had to be explained orally, because she could not read the forms (even though they were printed in Spanish). She had to ask for an inkpad to sign with her thumbprint. Medicine dosages remained a mystery. At restaurants, she could not read a menu. At home, the TV remote was daunting because she didn’t know which numbers corresponded with which channels.

There are countless other examples, but the one that was most compelling to me was the fact that little Maria Ingrid had never seen a book in her life. I had many toddler books in Spanish, so we looked at books together every day. It was her favorite thing to do. She would toddle over to me with an armful of books, and we would look at them by the hour. One time she brought a favorite book to her mother, hoping to hear her read the story. Ingrid soon realized that her mother could not read the words. Frustrated, she got up out of her mother’s lap and brought the book to me to read. I ached for that young mother, realizing at that moment that she and all those who do not read are destined to live on the periphery.

Literacy matters. Promote and support it at every opportunity.