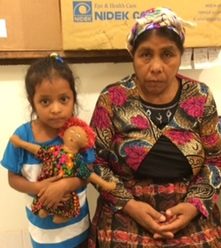 This photograph of a traditional Mayan grandmother and her 5-year-old granddaughter reveals the reasons that I have gone on medical trips with Casa Colibrí to northwest Guatemala for the past 13 years and will continue to go in the future. This grandmother has seen many brothers, sisters, children and friends die in her 60 years. Many have died from medical problems that we can easily prevent or cure in the United States. But due to Guatemala’s poverty, and its lack of health initiatives, medical programs, doctors, nurses, and health promoters, death is as common as the daily crowing of the roosters. She has lost loved ones due to dysentery from contaminated water, tetanus-infected skin cuts, and blood poisoning as a result of tooth abscesses. Lack of nutritious food makes her, and those she loves, susceptible to many medical complications.

The granddaughter represents hope. Hope that, as a result of the efforts of the Casa Colibrí volunteers and financial supporters, she will not be among the 25% of Guatemalan women who die in childbirth. Hope that her baby will not be part of the 50% of infants who die before their first birthday. Hope that she will have access to health promoters, nurses, doctors and specialists who will help her to live a long and healthy life.

I go to Guatemala every year to let the grandmother know that I have some understanding of the pain and sadness she has seen in her six decades of life. I also go to let that 5-year-old child know that there are people who care enough to try to ensure that her life will be healthier and happier.