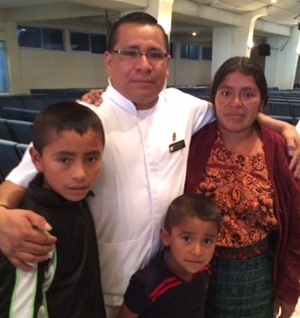 Four years of perseverance and sacrifice were culminating in the ultimate accomplishment – graduation with a nursing degree from the most prestigious university in Guatemala. Mateo was becoming a professional nurse! He will be working full time at the clinic, allowing Casa Colibri to meet one of our highest priority goals of being able to provide for the ongoing health care needs of the indigenous Mayan people of Northwest Guatemala.

The road to this turning point for Mateo and for Casa Colibri was a challenging one. Casa Colibri had long looked for a health care professional to staff the clinic but to no avail. The remote location and its lack of reliable electricity, clean water and internet connection, led all to turn down our offers of employment. But then we met Mateo Nicolás. He was an indigenous Mayan school teacher in the tiny village of San Angel when he asked if he could attend a midwife training being held by Casa Colibri. He wanted to prepare himself to better meet the health needs in his village since no village health promoter worked there. At the training, his desire to learn and ability to quickly grasp new material were readily apparent.

We asked Mateo if he would be interested in attending nursing school with the goal of staffing the clinic following graduation. This would mean leaving his wife and two children to go to school in Quetzaltenango for several years. It would mean daunting entrance exams, rigorous coursework and demanding professors. After thoughtful discussions, Mateo and his wife agreed the outcome would be worth the sacrifice.

To make the plan doable, we needed to find a way to support Mateo’s family while he was away, and to pay all educational costs. Casa Colibri agreed to provide a monthly salary to Mateo while he was in school, and Rotary International, as part of their Future Vision Global Grant program, provided a comprehensive scholarship. The logistics were in place to make the dream a reality. The long months of hard work, however, could only be done by Mateo.

Standing with his family in front of the church where the Baccalaureate service was about to begin on November 20th, 2015, Mateo could reflect on the incredible effort and sacrifice that had brought him to this point and bask in the deep and satisfying sense of accomplishment. Linda Eastman and Francisco Fernández from Casa Colibri were there to share in the moment and help celebrate the occasion. Mateo gave Linda the honor of affixing his pin on his uniform during the ceremony.

The next stop was the academic graduation ceremony held at the National Theater. It was characterized by all the pomp and circumstance befitting such an occasion and ended with the 48 new nursing graduates taking an oath to their profession of nursing.

What a day! It was beautiful, meaningful and memorable. Now Mateo and Casa Colibri stand together at the start of a new partnership as they work together to provide high-quality, ongoing health care for the indigenous Mayan people of Northwest Guatemala.